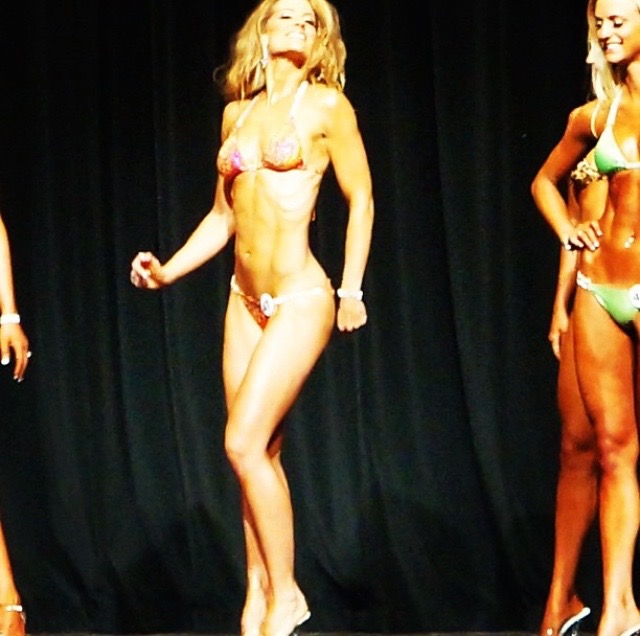 and what God is still teaching me about it today…

June 1.  Always a day I pause to remember and reflect on how far I’ve come.

In life, we will have these cornerstone days of our history; where it’s almost as though you can dissect your life into “before” X and then “after” X.  This day, in the history of my body image is that day.

June 1 was the day that I did my first (and only) body building competition.  It was the moment where I was backstage, a lean 13% body fat and still felt like the “fat girl in the room.”  It was my moment of absolute certainty that having the perfect body was NOT the cure for my insecurity I hoped it would be.

It was also the day that my now husband came back into my life, which trust me, with this handsome stubborn man I am married to, is a miracle that only God could orchestrate!!  Love you, Howard 😉 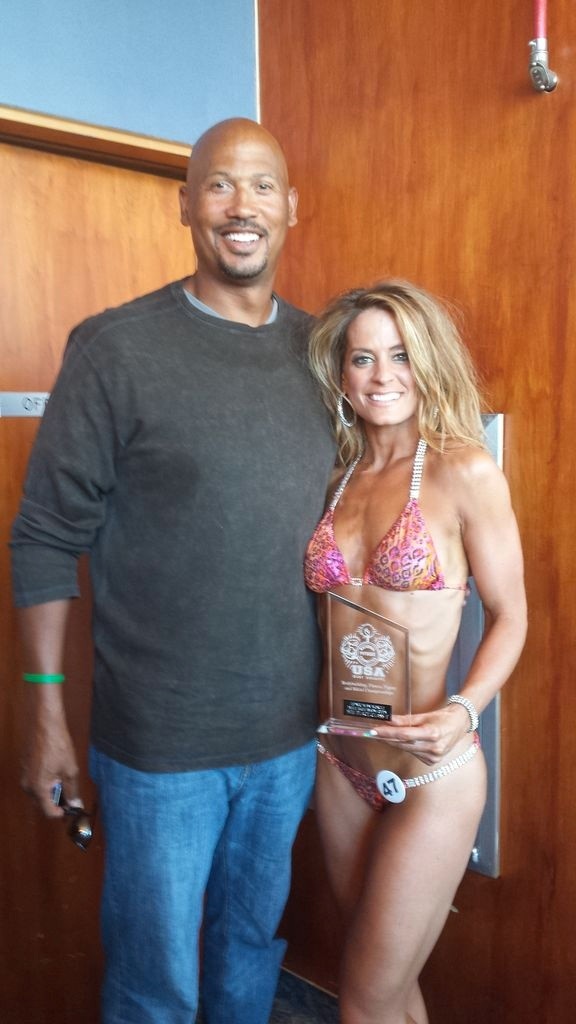 This day includes a dichotomy of feeling like I disappointed God with my disobedience while He was busy simultaneously BLESSING me with the man of my dreams.  All of which was a miracle that has penetrated my life so deeply that I decided to devote my life, business, and body to Him all the more.   It sent me on a trajectory where I would find my calling—and ultimately, finding you, Friend, through this platform!

So, I’ve written quite a bit about this day and how much it has changed me (you can read past posts here).

But lately, I have been having a more Spiritual understanding of what God was really doing for me as I have been reading the book of 1 Samuel.

1 and 2 Samuel tell the story of the prophet Samuel who would be used by God to anoint both King Saul and then King David in the Old Testament.

For those who are not familiar with many OT stories, I think you would really like 1 Samuel because it reads like book.  And if you want even more of a colorful picture of this story, I really like the completely fictional, but accurately Biblical account of this by author Francine Rivers in her book “Sons of Encouragement.”

At this time in Biblical history, we see the people of Israel are getting antsy and are falling prey to, once again, trying to fit into “social norms”instead of sticking to what God has called and commanded them to do.

So they are asking for a King so they could be like all the other countries around them.  In doing so, they essentially are rejecting God as their King, Who tells them as such (through the prophet Samuel) and yet they demand one nevertheless.

So, God fulfills their desires and chooses for them a King that would fit their shallow standards.  Saul is a King that is “tall and handsome” and has the stature that would look the part of a King.  (1 Samuel 9:2)

But, the problem with Saul is that he is woefully insecure.  He cares far more about pleasing men than he does about pleasing the Lord and so he is irresponsible, proud, and disobedient to the specific commands God gives him.  In doing so, God turned his back on him and even says, "I regret that I have made Saul king, because he has turned away from me and has not carried out my instructions.” (1 Samuel 15:11).  Ouch!

King Saul would still rule for 40-years as King, but he would be tormented by evil, prey to irrational fears, and would eventually kill himself in battle.

Meanwhile, God would not abandon His people, but instead would deliver for them a King that would to this day be the epitome of pride and prestige to the nation of Israel (in fact, when I recently visited Jerusalem, the Jewish quarter has a sacred area of where they believe King David’s tomb to be).

God appointed and anointed a boy, King David, who was not the tallest or the strongest or most aesthetically “king-like” in appearance.  But he was a “man after God’s own heart.” (1 Samuel 13:14)

And even though this man would commit grave sins against the Lord as well (he would be an adulterer and murderer!), he would humble himself, throw himself at the mercy of God, and God would resurrect this King as a historical powerhouse that would unite all 12-tribes of Israel like never before and serve as the lineage to Christ himself!

Some lessons and parallels I see:

You see, just like the people of Israel who were demanding a King of God, I lived a life that demanded the superficial blessings of God based on the “social norms” surrounding me.

I wanted to “look the part” of everything.  The reason why I ever entered the extreme dieting and exercise program of training for the bikini competition was so I could “look a part” of trainer and someone I thought I needed to be to be more successful and well liked.

And, while God warned me, just like He warned the children of Israel, He gave me exactly what I “wanted” in my looks so I would be woefully aware that I did not have “what I needed.” (which was true confidence).

God will allow you to fail at the things you THINK YOU WANT in order to prepare your heart to receive what He knows you ACTUALLY NEED.

King Saul was that experience for Israel.   Choosing King Saul for Israel was not a “mistake” that God made.  I believe He knew exactly how it would play out but still gave Saul every opportunity to choose a different path for himself.

God was teaching the Israelites that looks only get you so much.  And just because someone is big and tall and “looks" like a King, does not mean that they have the character of a King nor are they ready to be truly used by God.

This was me as well.  “Looking the part” would never make me ready to play the part in character.  And I would only learn that from the hardship of pain from failure.

What Israel would learn, what I would learn and what I hope you learn in your body journey too, comes from the Truth of God’s Word when He was instructing Samuel to choose the smallest and youngest brother of the house of Jesse,

We serve a God of great mercy friends!  We serve a God of abundant grace.  In things great and small; our sins and our strengths.  He works it all for our Good, but only if we can humble ourselves before Him and receive it.  Saul failed to do this, but David excelled at it.

I encourage you as you pass by a mirror today, if you are tempted to feel disappointment in what you see reflected back, to pause, and take a moment to reflect on your HEART more and receive some love from God.

Open up to a heart posture of surrender.  Tell God that you know you care about your surfaces a lot, but allow Him to do His good work on your heart.  When God opens the eyes of your heart, you gain peace with your body and purpose with you soul.

Nothing feels more satisfying that fulfilling God’s purpose IN YOU.  Set your thoughts back on taking that next best step with Him. 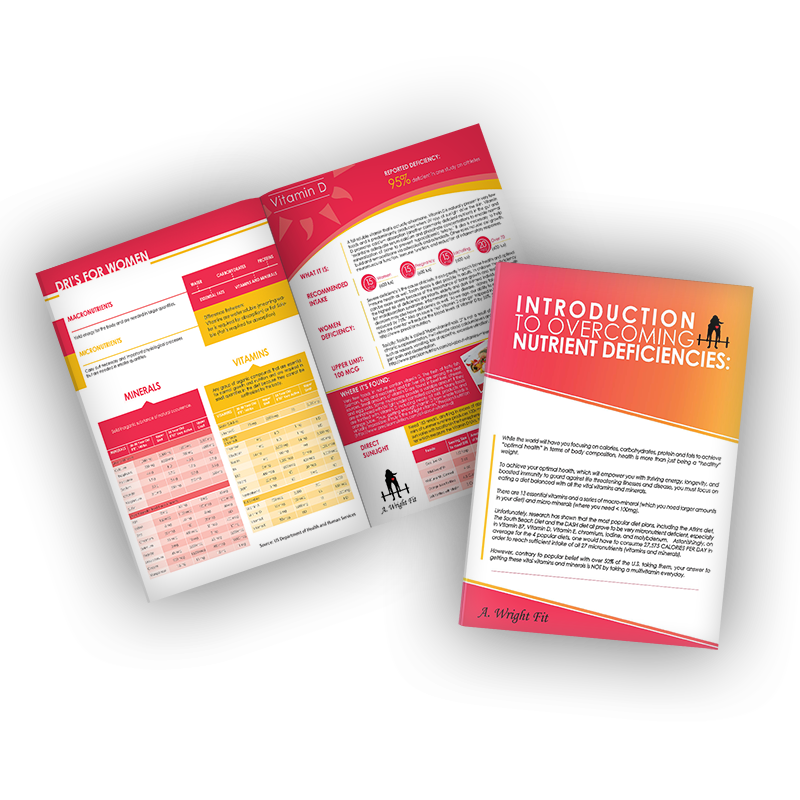 Ready to SUPERCHARGE your nutrition in 2017?

Get this FREE guide of the TOP 10 NUTRIENT DEFICIENCIES AND WHERE TO FIND THEM FOR LESS CALORIES.

Studies are showing that some of the most common weight loss diets are also the least nutrient sufficient in the vital vitamins and minerals!  Other studies also show that multivitamins are NOT the answer, as huge metadata results indicate they are associated with higher mortality rates!

My FREE guide not only gives you where to find these most common deficient vitamins and minerals, but also gives you the serving size and nutrition data to help you get the least amount of calories per food choice!

I even put all the information together into 2 days of menus that ensures you can get all the vitamins and minerals for UNDER 1700 calories!